What does the First Amendment say?

The First Amendment to the U.S. Constitution reads: 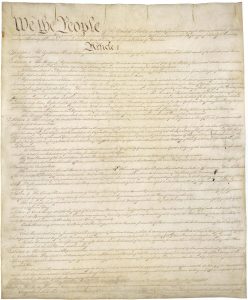 Congress shall make no law respecting an establishment of religion, or prohibiting the free exercise thereof; or abridging the freedom of speech, or of the press; or the right of the people peaceably to assemble, and to petition the Government for a redress of grievances.

If we break that language down, it says that the government can’t do a number of things: (1) establish an official religion, (2) prohibit the free exercise of religion, (3) abridge (limit) freedom of speech, (4) freedom of the press, (5) the right to gather and groups or (5) petition the Government for change.

How does the First Amendment apply to game development?

The word “speech” in the First Amendment applies more broadly than the word might imply. In this context, “speech” means “expression.” Speech can be an action without words: kneeling on the ground during the national anthem or burning a flag, for example. Speech can also include artistic endeavor.

The Free Speech Clause exists principally to protect discourse on public matters, but we have long recognized that it is difficult to distinguish politics from entertainment, and dangerous to try. . . . Like the protected books, plays, and movies that preceded them, video games communicate ideas—and even social messages—through many familiar literary devices (such as characters, dialogue, plot, and music) and through features distinctive to the medium (such as the player’s interaction with the virtual world). That suffices to confer First Amendment protection. . . .  [W]hatever the challenges of applying the Constitution to ever-advancing technology, the basic principles of freedom of speech and the press, like the First Amendment’s command, do not vary when a new and different medium for communication appears.

More on what First Amendment protection does and does not mean in Part 3.