With that in mind, assuming speech is “protected” by the First Amendent, what does that actually mean?

While the text relates only to Congress, the Amendment has been interpreted to apply to all government regulation or action. Any agency of the federal government has to keep the First Amendment in mind when regulating speech. Likewise, the courts, before ordering any restriction on an individual’s speech, must consider whether that order would pass muster under the First Amendment.

This protection also applies to State and local governments through the federal court’s application of the Fourteenth Amendment. This process, known as “incorporation”, is relatively recent in the scope of world history. The First Amendment did not apply to the states until a series of decisions of the Supreme Court beginning in the 1920s. Many states have similar protections in their state constitutions.

Notably, this protection does not apply to non-governmental actors. This means platform operators, publishers, social media sites, developers… none have an obligation to carry any particular content. There may be other reasons (law or otherwise) for them to take a hands-off approach, but they are not required to include your game, comment, video, post, etc.

The second relevant part “abridging the freedom of speech” is also critical to understanding First Amendment protections. Some laws do not “abridge” the freedom of speech. There are those that do not regulate “protected” speech. There are also those that do regulate protected speech, but are still permissible because they do not impermissibly curtail individual rights.

In deciding if a particular government regulation is an unlawful abridgment of free speech, courts apply different levels of scrutiny depending on the type of regulation.

Where a law or regulation is content-neutral, courts apply “intermediate scrutiny.” Where it is content-based, they apply “strict scrutiny.”

Content-neutral restrictions, sometimes called “time, place and manner” restrictions are restrictions on speech that apply no matter what the message of that speech. They regulate the “how” and not the “what.” Classic examples are requiring newspaper boxes to be a certain distance away from crosswalks, requiring permits for parades or demonstrations or prohibiting amplified noise (including speech) at night.

This is “intermediate scrutiny.” Important or substantial government interests are somewhat subjective, but a reasonable person can form a pretty good idea of what is required there. If the government interest is really just a manufactured reason to prohibit speech, then it won’t pass muster.

The restriction can’t be greater than necessary to accomplish its purpose. For example, the government has an important interest in protecting patients and staff at abortion clinics and keeping the peace, generally. In order to further that purpose courts have held that local governments can impose buffer zones around these clinics. But, courts have also struck down those buffers where they are too broad to accomplish their purpose.

Finally, if the restriction effectively cuts off a speakers ability to convey the message, it won’t pass intermediate scrutiny.

Where a regulation changes depending on the content of the speech, courts apply “strict scrutiny.” This is a much harder test for the regulation to pass.

Courts will look at whether (a) the restriction serves a compelling government interest (not just important) and (b) is narrowly tailored.

Narrowly tailored, in this context, is more than just “no greater than necessary.” Instead, it must advance the interest of the government, not be overinclusive (regulate more than is required), underinclusive (fail to include all that would be required to accomplish the purpose – which would show the government didn’t care enough about the purpose for it to be “compelling) or unduly burdensome (it must be the least restrictive alternative in order to fulfill the purpose).

Some government interests have been clearly established as compelling: maintaining stability in the political system, ensuring criminals do not profit from crime, protecting the rights of individuals from discrimination, protecting voters from harassment, etc.

Even with a compelling interest, a content-based restriction fails if it is not narrowly tailored. 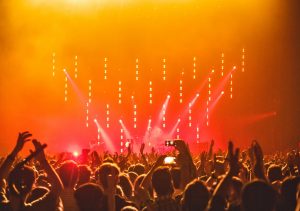 If the law fails to advance the purpose, it will fail. For example, a law that seeks to prevent assault by preventing rock music concerts. There is no evidence (that I know of?) that links rock music concerts to increases in assault. So, the law would fail outright. The same law would also fail even if that evidence did exist; don’t panic.

If the law is overinclusive, it will fail. For example, a law purporting to protect children from obscenity (a noble ambition) that prohibits the possession of vulgar (perhaps not obscene) materials by anyone (not just children) is over-inclusive in two ways. It prohibits more content than is required. And, it bans the sale to more people than are required to prevent children from accessing obscene materials.

If the law is underinclusive, it will fail. For example, if a law prohibits amplified noise over a certain decibel level to preserve peace or keep order, but specifically exempts the local race track, church bells, sirens and ice cream trucks, it is underinclusive. It has exempted too many loud noises and demonstrated that the purpose of the law was not really to stop loud noises, but rather to target specific types of loud noise. Often, under-inclusivity  can be found in exemptions.

If the law creates an undue burden, it will fail. For example, imagine a law that prohibits non-governmental, non-school and non-church parades (content based) without a permit in order to ensure adequate traffic control measures are taken. Ignoring the under-inclusivity issue created by the exemptions, the regulation might be okay. However, if it attached a $500,000 fee to the permit, it would be unduly burdensome.

For regulations on non-speech conduct, the government need only have a rational basis. The government must only show a legitimate purpose and a means rationally related to that purpose.

How does all this get applied to video games? Check back for Part 5.