What does the First Amendment Protect? 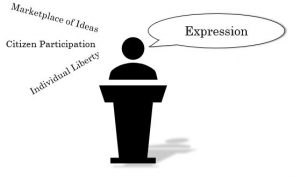 Expression does not have to be words. For example, the Supreme Court has ruled that video games (even if they do not contain words) are expressive. Likewise, art, music and the like are expressive.

Actions can also be expressive. Consider a football player kneeling during the national anthem. Whether or not you agree with the message: the kneeling expresses a message beyond just the act of kneeling.

By contrast, something like driving is not (without more) expressive. Driving can be expressive, like when Teamsters block highways in California. But ordinarily, it isn’t. It is non-expressive conduct with no First Amendment protection.

What doesn’t the First Amendment Protect?

In addition to non-expressive conduct, the First Amendment does not protect some categories of speech – even if they are expressive. These include:

Fighting Words – Speech that seeks to elicit a violent response or that by its very nature inflicts injury is not protected. For example, if a person stands up in front of a police officer and says something like “why don’t you pick on someone your own size, pig?” This would not include offensive speech. It is an exceptionally narrow, and some say dead, exception.

Clear and Present Danger – The First Amendment does not permit the government to forbid or proscribe advocacy of the use of force or violation of law. Where that speech extends to advocacy directed to inciting or producing imminent lawless action, the First Amendment no longer protects it.

True Threats – Threats – other than those made in jest – are not protected by the First Amendment.

Obscenity – The First Amendment does not protect obscenity. It does protect offensive speech. Most video games, even those kicked from Steam for violating its content policy, do not run afoul of this. Obscenity is a narrow category of speech that goes well beyond offensive or pornographic. The basic guidelines are that the speech appeals to a prurient interest under contemporary community standards and lacks serious literary, artistic, political, or scientific value. The classic, horrifying example of this is child pornography.

Infringement of Another’s Rights – Copyright and trademark infringement, violation of another’s right of privacy or publicity, trade secret rights, etc. A court (the government) has to be able to enforce these rights in order to have the protections exist in society. By enforcing one party’s rights, the court almost necessarily impacts another party’s First Amendment rights.

Defamation – False statements that identify and impugn another are not protected. They may be actionable by the person about whom they are made.

In Part 4 of this series, I’ll discuss how even protected speech can be regulated, and how courts judge those regulations. For more on the First Amendment and Video Games, you can check out our introduction to the series or the overview on First Amendment basics.