What does breach of contract mean?

What is a breach of contract? You read about it a lot in news articles and it seems like a simple enough phrase – but there’s more to it than initially meets the eye.

Any breach is not necessarily enough to walk away from the deal, though – it has to be a material breach. A material breach is when a specific condition in the contract has been broken that materially affects the contract. The test for this is if the condition or the term was of such importance that without it, the other party would not have entered the contract in the first place. For example, if a contract is for the delivery of widgets, and the widgets arrive a day late, the buyer probably can’t walk away from the deal (lawyers always have to say things like “probably” because there is a chance the terms of the agreement specifically promised on-time delivery or included a “time is of the essence” clause).

An anticipatory breach is when one party indicates – either by words or actions – that it has no intention to perform the agreement. The other party can then terminate the agreement. For example, a contractor is working for a game studio and the game studio folds and issues a press statement that it is “terminating all current contracts.” The contractor may then breach the agreement on the assumption that the game studio might not ever finish developing the game it has been contracted to work on or pay the contractor for future work based on the studio’s statement. It might be reasonable to do this. A breach in this circumstance is not without some risk: if sued for breach, the contractor would have to justify its breach based on the evidence of the studio’s impending or stated breach. In some instances, the contract or applicable laws or regulations might require a notice of the failure and a demand for adequate assurances that the other party will perform, after which the non-failing party could terminate if the failure or refusal to perform persisted. 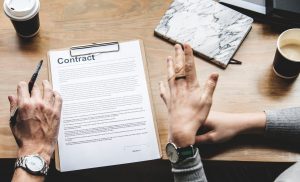 There’s also repudiation. When a party specifically makes an unconditional and express refusal to perform it is called “express repudiation.” Express repudiation can’t be conditioned on a future event. It can’t say, “if this doesn’t sell, we can’t pay you.” And, it can’t be ambiguous. It can’t say “we might not be able to keep this relationship going.” It has to be clear: “We are not going to fulfill this contract.” Another type of repudiation exists when one party makes it impossible for the other to perform. For example, if a development studio is developing for a licensed IP and the license holder never delivers assets required for development. Another repudiation would exist if property subject to the agreement is transferred to someone else. For example, one company is going to buy another’s equipment, and the seller then gives all the equipment away to charity. The contract for sale is still in place, but the buyer could assume it has been repudiated.

In some situations, there is what we call an efficient breach. An efficient breach is still a breach of the agreement, with all the attending baggage. It is a breach in which the breaching party knows it is breaching the contract and knows it’ll owe damages, but it may be worth it anyway. Sort of like breaking a lease on an apartment when the tenant knows it has to move or has another house lined up. It might cost more in the short-term but in the long-term, it may be the more fiscally responsible course of action… at least, on one end of the deal.